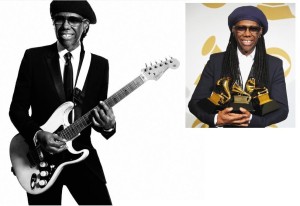 Nile Rodgers is THE greatest Groove Producer of all time.

Nile Rodgers is one of the greatest record producers of all time, period. He has been one of the biggest influences in my musical life since I was a teenager. Nile comes from the Miles Davis school of “It’s not what you put in, it’s what you leave out”.

When Chic hit in the late 70’s, I was blown away. Nile, Bernard Edwards, and Tony Thompson were so tight they sounded like no one else. I’m still blown away listening to those 37-year-old grooves.

Nile parlayed the massive success of Chic, along with his virtuoso guitar skills into a production career of some of the biggest albums of all time (Bowie/Madonna/Duran Duran/Michael Jackson/Diana Ross).

I couldn’t be happier for Nile recently winning three Grammy Awards for his stunning contribution to Daft Punk’s Album of the Year. The fact that his work is still relevant, and his contributions are still at the top, decades after his breakthrough is a testament to his unique and truly otherworldly musical gifts. Nile also received the 2014 MPG Inspiration Award from the Producers Guild, last Thursday night.

I first met Nile in 1986, as I was spending a great deal of time in Manhattan around the Power Station. The last I saw Nile, he couldn’t have been more generous and engaging.

Tonight Nile will perform at the 2014 Brit Awards with Pharrell, and later at the after party at the Savoy Hotel (Stunningly and long pushed for) with my favorite Aussi Doll Kylie Minogue. It should be a groundbreaking night for many reasons.

I will write more after the Brits.

Nile, Thank You For Everything You Have Given Us All, George